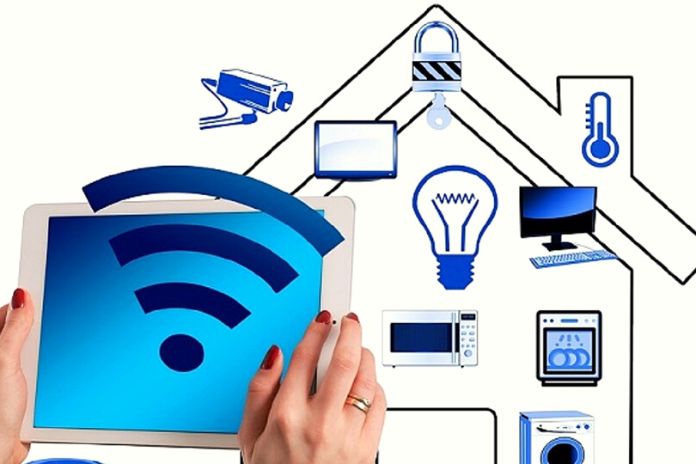 “Smart Home” is the umbrella term for the networked home. We explain how your home can be networked, what options there are for control and data storage and what dangers there are. Most people interested in fully networked houses and apartments first came into contact with it through science fiction films in which the protagonists effortlessly control lights, heating, blinds and other gadgets using voice commands, fingerprints or eye iris scans.

What was just a dream for many years is now a reality: numerous manufacturers, Internet providers, power grid operators and online retailers offer a variety of components with which one’s own home can be networked, monitored and controlled. But it can be challenging to keep track of the jungle of devices, standards and services. In this guide, we summarize what you should consider when setting up a networked home. In a separate directory, we explain that owners can set up an extensive networked home and tenants.

These Components Can Be Networked

At this point, we cannot list all networked devices individually – that’s why we have summarized them in groups:

Networking the interior and exterior lighting is relatively easy to implement. Luminaires can be switched on and off, or complex lighting profiles can be created according to a specific schedule or on “call.” Smart home newcomers often start with controlling the lighting.

With the appropriate upgrade, windows and doors can be opened and closed remotely, for example, if you forgot to close a bottom-hung window when leaving the house. The networking of windows and doors is mainly used to protect against burglary and storms. The control of the blinds can be combined with the lighting control.

A particular case with the doors is, of course, the central front door, which usually has a bell and intercom. If a networked surveillance camera is added, the following scenario is conceivable: a visitor rings the doorbell while you are still on your way home. The owner can use the app and the camera to see who is in front of the door, speak to them via the intercom and open the front door for them via the app. With a corresponding relationship of trust, you could even open the door for the parcel carrier from afar.

The simplest form of networked home is an intelligent socket adapter: Any device connected to the socket can be switched on and off remotely. Numerous manufacturers of washing machines, refrigerators, electric stoves, coffee machines and many other devices are now networking their devices. The app can be used to explore the fridge’s contents, preheat the oven, create a unique coffee blend – or the washing machine in the basement reports when the wash cycle is complete.

If you equip your home with networked sensors for light, movement, temperature, humidity, smoke, etc., you can program your smart home so that a sensor that reports a corresponding event triggers another event. For example, a networked smoke detector can automatically alert the fire brigade if the residents are not home.

In addition to lighting control, the networking of televisions, radios, stereo systems and other multimedia devices is part of the essential equipment of a smart home. However, one cannot speak of real integration into the networked home if only the Smart TV is connected to the Internet. However, if apps can be used to control lights, heating, surveillance cameras, etc., from the television, it is a fully-fledged part of the smart home.

Today, numerous network operators for electricity, gas and water network the meters with the Internet, for example, to read the meter readings remotely. Strictly speaking, this technology, known as “smart metering,” is not part of the smart home, especially if the operator does not grant the customer any access to the transmitted data. However, integration into the smart home is possible if the network operator allows the customer to access the data.

This Is How The Smart Home Can Be Controlled

At the beginning of the smart home era, around 20 years ago, almost all innovative home systems were controlled via a central control unit hung up in the hallway, for example. This still exists today – the control center is usually operated via a touchscreen. However, it is cumbersome to always go to this center when it is the only control option in the system.

Most of today’s intelligent home systems can be controlled via apps for Android and iOS, either with a smartphone or tablet. This not only has the advantage that configuration or control is possible anywhere in the house and feedback can be received from the system, but this also works on the move via mobile Internet.

Voice input systems developed by intelligent home manufacturers have hardly caught on – Amazon Alexa, Google Assistant and Apple Siri, which can be coupled with numerous innovative home systems, are now ahead of the game when it comes to voice input. This can be done in different ways: The customer can purchase a smart speaker and integrate it into the home network or use the voice control of the smartphone. More and more intelligent home components are now directly integrating voice assistants.

Only those who install sensors in their networked home can also have the smart home controlled by these sensors. Various events (temperature change, sun/clouds, movement, water/humidity, etc.) trigger a previously defined event when programmed accordingly (for example, windows are automatically closed when it rains, and blinds are lowered from a specific room temperature).

The smart home can also be automated time-controlled without any sensors – this has been the case since the 1950s with analogue timers. Regardless of manual intervention, the light or heating can be switched on and off at previously defined times.

Smart home controls via fingerprint scanners, iris scanners, voice recognition, and the like belong even more in science fiction. Since biometric systems can still be tricked and consumers have numerous reservations about biometrics, such technologies have yet to be able to establish themselves in home networks. But what does exist are intelligent home components that react to clapping via a built-in microphone, for example, and trigger an action.

With Or Without An Internet Connection And Cloud?

Anything connected to the Internet can be attacked: this also applies to innovative home systems. Of course, it’s an excellent service when sensors and surveillance cameras upload their data to a cloud so that it can be called up anywhere in the world using a smartphone. There are now even intelligent home components such as cameras and doorbells that are connected to the Internet independently of a WLAN via LTE and, in the future, also 5G . Anyone who can control their front door, windows and heating components remotely via the Internet must theoretically assume that a hacker can do the same – if the software is poorly programmed and has security gaps, which happens again and again. You have to distinguish between three options:

In principle, it is possible to configure a smart home in such a way that it only communicates in the area of ​​its WLAN and does not send or receive any data via the Internet. However, remote monitoring falls flat with this option unless the owner dials into their router via a VPN.

Smart Home With Platforms Provided By The Manufacturer

This is usually the most convenient version for the customer, but the manufacturer often allows this to be paid extra as part of monthly subscriptions. After purchasing the components, the customer only has to create an account and cancel a subscription. However, this comfort is paid for with a high level of dependency. Because worse if there are technical problems, the manufacturer files for bankruptcy or otherwise suddenly disappears from the market: Then the servers are often switched off without warning, the expensive devices are useless electronic waste – and the trouble is significant. Data protection scandals are also familiar with sloppily programmed platforms.

Smart Home With Its Platforms

The best compromise is probably if a customer can network their devices and sensors via the Internet but retain control over the data in the cloud . A specific dependency still exists with regular online storage services . If you dare, you can also set up your shadow in your home network.

Where To Buy Smart Home Components?

In addition to electronics retail and internet shops, various network operators and providers have expanded their existing range of products to include innovative home components in recent years. The providers often make a pre-selection of features that are compatible with each other, which can significantly reduce the confusion for the beginner:

The classic Internet providers often already supply the broadband connection along with a compatible router and are therefore also interested in earning money with other services. In particular, cloud services for the smart home can then be paid separately as a supplement to the Internet connection.

Network Operators And Providers For Electricity And Gas

Anyone who supplies the energy and has already established a customer relationship can also supply control devices, smart speakers, surveillance cameras, etc., to prevent the customer from having to pay a lower energy price after a year change provider. Because once you have set up a complete smart home and created a sophisticated configuration that can be administered online, you may feel reluctant to constantly switch providers and will stay with the provider even if the price increases. All innovative home applications from network operators and providers also serve to retain customers, which is why the follow-up costs and notice periods should be checked carefully in advance.

Also Read: Nothing Phone (1): An Advanced Smartphone With An Innovative Design